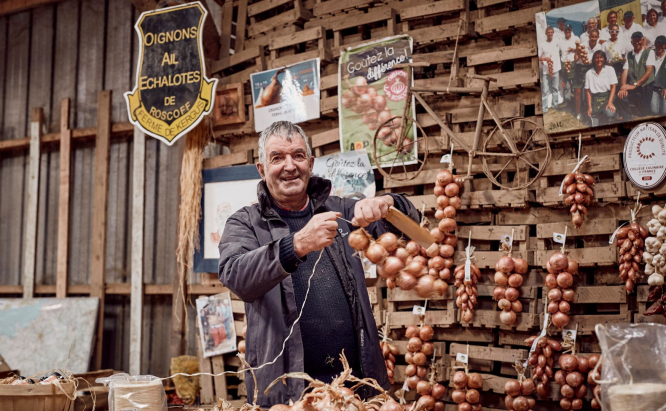 The onion – flavours, dishes and celebrations to celebrate a French icon

Onions are so French they should be red, white and blue when you cut them.

They are very present in traditional French cuisine and can be found in salads, pizzas and, of course, the iconic French onion soup. But not all onions are created equal.

Peel away a few layers of the subject and you’ll discover the delights of a multitude of different types of onions.

In fact, onions are such a passion that many places in France hold entire festivals dedicated to them.

Depending on their variety, onions are harvested anytime between June and September, which means there are local onion festivals all over France throughout the summer.

If you don’t already know your (French) onions, visiting these food festivals is a great education.

Read more: ‘Take care of your onions’ and other phrases related to onions

Read more: MAP: A tour of France in local fruits and vegetables

Roscoff in Brittany is home to the Onion Johnnies, onion growers who spent nearly half the year cycling around the UK on bikes adorned with chains of onions, selling door to door.

Often wearing striped sweaters and berets to attract attention, their style has become synonymous with all French people.

A few Onion Johnnies have continued to sell their produce in the UK throughout this century, driving vans full of onions around the UK for a few weeks at a time, but the combination of Covid and Brexit has ended that the tradition.

The small museum The House of Johnnies and the Roscoff Onion tells the whole story and is well worth a visit.

There’s information on traditional growing techniques, and they also have amazing photographs and old films of the Johnnies, shot in France and the UK, but be aware that everything is in French.

As you walk through the beautiful historic center with its half-timbered houses, don’t miss the lighthouse, a square red brick tower on the edge of the port.

The Notre-Dame de Croaz Batz church, with its suspended boats, is also fascinating.

Why Roscoff onions are special

The onion grown in Roscoff is soft and mellow, pink on the outside and white on the inside.

The story goes that a single seed was brought from Lisbon by a monk who planted it at the convent.

Today, the Roscoff onion is AOC and AOP and the annual harvest festival is one of the most important in the region.

The Roscoff Onion Festival takes place over a whole weekend at the end of August and is probably the biggest onion festival in France.

There are many stalls selling onions and workshops where visitors learn how to weave them into traditional ropes.

There’s a display of vintage tractors and farm machinery, a scavenger hunt, cooking demonstrations, a parade, face painting, music, food and loads of fun for the kids.

The sandy beaches of Roscoff

During your stay in Roscoff, don’t miss the Ile de Batz. 15 minutes by boat from the main port, it feels like a world apart.

The 12 km walk around the island is a very well marked and easy walk, or you can hire bikes.

The sandy beaches are magnificent. Out of season you might want to consider a picnic as many restaurants are closed.

The Georges Delaselle Garden worth a visit, with its collection of exotic flora from around the world. There is another fabulous park, the Exotic and Botanical Gardenwhich gives the impression of being in the Caribbean.

This sweet onion is eaten raw like an apple

The Saint-Turjan onion, often nicknamed the Desert Rose, was traditionally grown on the Ile d’Oléron, off the Poitou-Charentes coast. With its pink skin and very mild flavor, it can be eaten raw like an apple. It was very popular during the Belle Epoque.

Culture on the island was, however, gradually abandoned as oyster farming and tourism became more profitable, until a local association was created in 2019 to preserve the heritage.

The Saint Turjan Association encourages people to grow this variety of onions, and the seeds are available online.

Saint-Turjan onions can be bought on the island’s markets. There are many, so check with the tourist office.

The largest is the Château d’Oléron which is open every morning except Monday.

As well as onions, look for fresh seafood, especially oysters and mussels, and try the local Pineau des Charentes, which is a fortified wine made from grape juice and Cognac brandy.

Grown in the mountainous Cévennes in south-central France

Another very sweet variety is the Sweet Onion from the Cevennes which is pearly white and slightly elongated. Marketed with the slogan “as good raw as it is cooked”, it is often used in salads.

Its origins date back to the 15th century, but it only really became known in the 1950s.

Now AOC and AOP, it is the only French onion grown on terraces carved into the mountainside. Most of the production is still done by hand.

The Apple and Onion Fair is held on the fourth Sunday of October in the peaceful town of Vigan, in the Gard.

The festival attracts thousands of visitors who come to buy apples and onions, attend demonstrations of period agricultural machinery, and stroll through the 90 or so stands selling all kinds of local products, Pélardon and chestnuts in particular.

Attractions include a mini-farm, games and entertainment for children, a workshop on onion selection, music, dancing and great meals in the market square.

The sweetest onions are in Aude

As sweet as the Cévennes onion can be, aficionados swear the Citou d’Occitanie is even sweeter.

The small village of Citou (Aude) pulls out all the stops every September. This year the festival takes place on the 11th, with stalls selling locally produced lamb and pork, cold meats, goat cheeses, honey as well as onions.

There will be music and gallons of onion soup.

Still in Occitania, the Cébe de Lézignan has been cultivated around the village of Lézignan-la-Cèbe near Pézenas since the 17th century. (Catalan for onion is ‘ceba‘.)

Sweet and juicy lemurs have flat, white skin and can reach up to 10 cm in diameter.

The Sweet Onion Fair and Country Farmers Market takes place in mid-July, with demonstrations of making bouquets and strings, a competition for older children cebetastings and an evening of parades, music, singing, dancing and parties.

Also watch out for red onions from Villemagne (north-west of Carcassonne), flat and red with pink flesh. Locals swear they only taste sweet if grown in Villemagne.

They say that even though they are only grown a few miles away in another village, they have a much more pungent flavor.

Villemagne Sweet Onions are something of an insider’s tip. There is no celebration, no festival, no association.

They are only sold in local markets; find them in Bram (Wednesday), Castelnaudary (Monday) and Villefranche-de-Lauragais (Friday).

It is illegal to throw onions at people

The large Toulouges onions, soft and sweet, are almost the color of beets on the outside, although the flesh inside is pearly white. It is particularly good cooked in a pie, which is one of the local specialities.

It has been grown in Toulouges (near Perpignan) since the 19th century, when it was traditional for families to sell it by traveling by cart to the surrounding villages.

There also seems to have been some sort of tradition of pelting people with onions, as according to a regulation dating back to 1814, it is illegal to throw onions at people.

The Onion Festival in Toulouges is held in July with a farmers’ market, children’s games and street music. (Many chances to try this onion pie.)

There’s also a massive lunch (tickets must be purchased in advance) followed by a concert.

Onions and Scarecrows in the South

The Onion Festival in Pontailler-sur-Saône (Côte-d’Or) near Dijon is at the end of July, lasts two days and attracts around 4,000 visitors.

There are concerts, tastings, attractions, fireworks and the famous and tantalizing onion peeling contest.

This is serious business, and past winners peeled nearly 58 pounds of onions in 45 minutes.

The trick, they say, is not worrying about peeling off the dry outer skin, but attacking the second skin directly.

The winner pockets a check for 150 euros.

Admission is €2, which includes a raffle ticket.

Oermingen (Bas-Rhin) holds its Onion Festival (Where Ziewelfescht in Alsatian), in August.

On a Saturday evening and all day Sunday, 350 volunteers and 10,000 visitors taste all kinds of gastronomic specialties made from onions.

The signature dish is a stuffed onion served with a slice of hot cooked ham, but there are also fried onion fritters, baked onion pies, and every year they give away free onion soup. , a thousand liters!

All the while, there’s non-stop live music and dancing, turning the event into something of a music festival with extra onions.

Rabbit with onions at 02:00 near Lourdes

The Onion Day in Trébons (Hautes-Pyrénées) not far from Lourdes, a whole weekend takes place at the beginning of each month of June to celebrate the sweetness of local onions.

Trébons onions are easy to recognize because they are very large and pear-shaped.

The local specialty is rabbit or chicken cooked with onions and it is served non-stop from 10:00 a.m. until 02:00 a.m. the next morning.

There is also a farmers market, a petanque (boules) tournament, a fishing contest, fairground rides and various concerts as well as their famous pig races.

A group of young pigs, each with a number painted on their backs, are gathered around a leisurely paced racetrack, pushed by cheerful spectators who bet on the order in which the pigs will pass the finishing post.

The person with the winning ticket officially wins a pig, but apparently it’s very rare for the winner to actually claim their prize.

The festivities are complemented by a full program of aperitifs, dinners, lunches, dances and a 10 km hike on Sunday morning for those who still have energy.

Toussaint: Its origins and why chrysanthemums are on sale in France