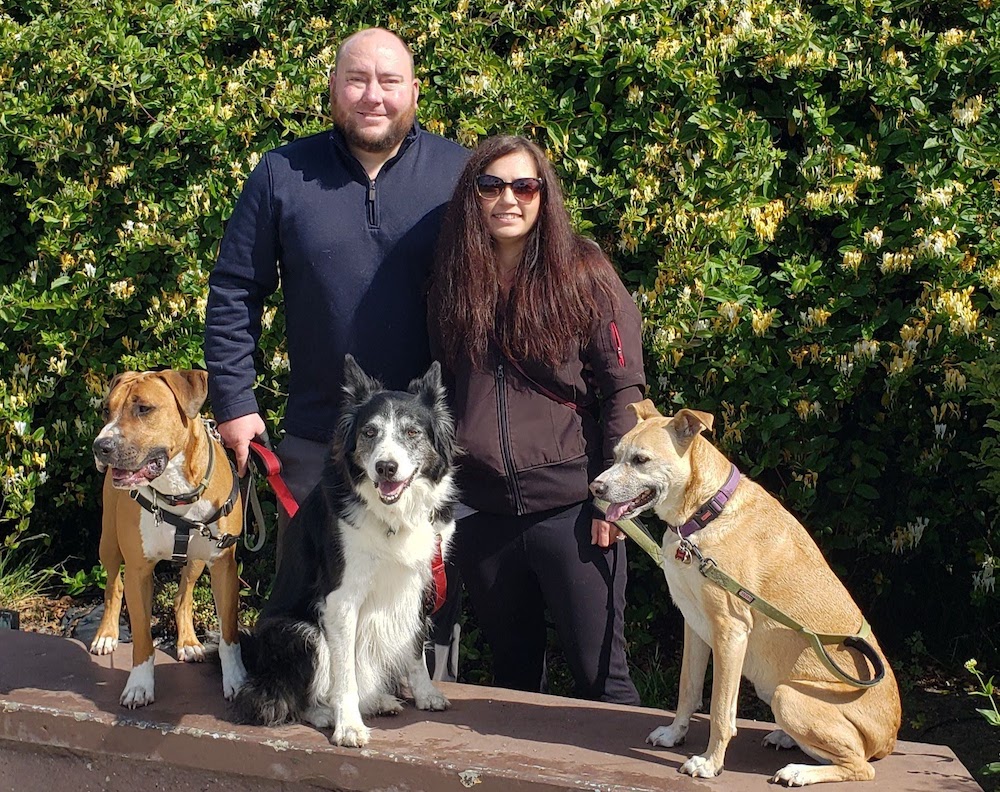 Chef and anglers team up for Pacific Pet Treats

Despite its name, it wasn’t always that way with the boxer-German shepherd rescue dog. She’s so finicky that she spits out Milk Bones and turns her nose up at high-end wet food if served more than one day in a row.

This changed when his humans Lance and Christina Koehler from Seaside started adding leftover fish he had caught in Monterey Bay, after dehydrating them.

“I hate food waste!” says Lance, who is also chef and general manager at Louie Linguini’s on Cannery Row.

And that’s not all that has changed. “His coat has become amazing,” says Lance, adding that his overall mood has noticeably improved.

His border collie brother Doug, a rescue himself, is just as temperamental and just as well-rounded. His long coat is now a source of shining family pride.

Then there’s their little boxer brother-Rhodesian Ridgeback Randy, another SPCA rescue, who will eat anything, so he’s not the best reference. But bursts a fish treat and suddenly her ADD pup evaporates.

“You have his full attention,” Lance says, “and so much water is working that we have to give him the treat faster so he doesn’t drool on the mat.”

Maybe that shouldn’t be a shock. After all, they are fresh, pure and natural products.

“Do you want to feed your pets a million ingredients?” Launch asks. “It was a complete game-changer for our puppies.”

“Pets live longer and healthier when you feed them well,” adds Christina, who as a mental health therapist brings Samba to sessions.

The Koehlers began sharing their dried waste with friends and family. An aunt tested them on the toughest pooches in her dog training classes. There was unanimous support for Samba’s enthusiasm, which got Christina and Lance thinking: Should we turn this into something?

As a longtime leader, Lance had the connections to make a business more realistic.

“Knowing the fishermen allowed us, pun intended, to scale this,” he says.

About 16 months ago they decided to go for it and started working on California Department of Agriculture and Department of Public Health approvals, designing logos, and attending product trade shows. for dogs.

Last weekend they launched Pacific Pet Treats on Wave Street. It occupies a split-level space across from the old Cannery Row Brewing Company and IMAX theater, on the ground floor of the Cannery Row parking garage, a location that promises plenty of foot traffic passing the old Monterey Crepe Company on the way to Monterey Bay. Aquarium.

“Everything in our cookies is going to be functional,” he says, citing the digestive benefits of celery and the breath-taking power of parsley. “No preservatives, no additives, no added sugars or salts, no fillers, nothing that doesn’t need to be in there.”

As RGF takes its process waste and unsold inventory and passes it on to Pacific Pet Treats, a waste stream is transformed into a healthy revenue stream in more ways than one. (When Edible visited prior to opening, one of PPT’s storage freezers was fully stocked with Monterey Bay salmon necks originally packaged for RGF retail.)

RGF Founder and CEO Alan Lovewell says it well. “Animals don’t need to eat all that processed food either,” he says. “And for better or worse, pet owners are willing to spend more on their pets than on themselves.”

Lance appreciates the chance to support local anglers and knows that this attention to sourcing will appeal to a discerning public.

“It’s definitely part of our mission to be community-minded,” he says.

Community connectivity also brightens the scene: local artists like Amanda Burkman and Hanif Wondir have produced portraits of good woods and girls and more exotic animals to hang on the walls.

There’s a lot more going on under the artwork, where an assortment of silly snacks and toys proliferate.

There are sustainable Jimini treats made from cricket, chew toys recycled from ocean plastics, “snuff mats” that hide treats, plush cat burrito squeakers and tennis ball cannons. Christina clearly had fun curating the selection, and it’s hard to escape the store without laughing (or at least buying a silly thing for your furry BFF). The dog-mad community we live in is going to eat that.

“People come in and smile,” Christina says. “That’s what we want: smiles.

Not quite, because they want something else: the kind of seven-star review you can only get from a dog.

I turned to Atticus Orion Rowe, another rescue who happens to be my spiritual advisor and closest labradoodle friend. (He’s also 8 today, so HBD, AOR.)

He’s at least as picky as Samba and is ready to go on long hunger strikes if his routine is interrupted for, say, a road trip. Give him one of his favorite treats, and he’ll migrate to a corner for privacy and eat it slowly.

This is not the case with the Pacific Pet Treats that I tested on him.

That cod skin turned sayonara, faster, faster than I’ve seen it eat anything. Suddenly, the most distant dog on the mainland wants to kick me hard.

He was so enthusiastic that his mom and I decided to nibble on a small piece. Not bad, but a little too intense to swallow.

Which brought me back to a key point: it’s not about us. These are the Atticus, Dougs, Randys and Sambas.

They are our biggest fans, our joy and comfort, our inspiration to be the humans they believe us to be.

Mark C. Anderson is a writer, photographer, editor, and explorer based in Seaside, California. Join @MontereyMCA via Instagram and Twitter.

Mandarin fish spotted in Singapore for the first time